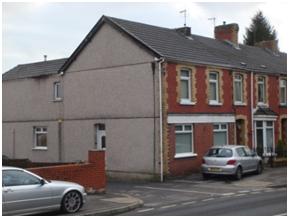 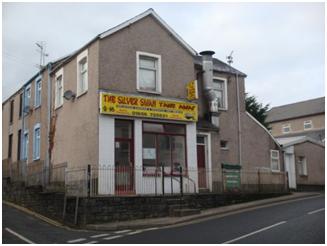 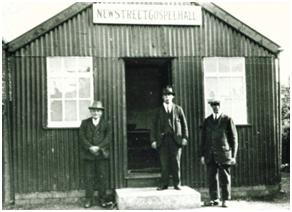 This Church of God was established on 10thMarch 1912, initially as the Church of God, Tondu. The assembly register for that first Sunday records seven people as being present; Mr Jesse Doel and his wife Alice, and their son Jesse; Mr George Prasher and his wife Margaret and their son George; and a relation, Robert Prasher. Family names obviously stretched the imagination in those days as the “Doels” also had a daughter called Alice as well as son Jesse and the “Prashers” had a daughter called Margaret, as well as son George! Jesse was an overseer from the start and George a deacon of the small church. The church met for its first 5 years at the home of Jesse: 42 or 43 Maesteg Road, Tondu. There is a little confusion as the 1911 census reveals Jesse lived at number 43, but the church archives suggest the meetings were at number 42. David Davies and his wife and daughter Bronwen were added to the assembly in 1912 and Mr Davies was a stalwart alongside Jesse Doel for many years.

In 1917 the church moved to a new meeting place, just the other side of the railway, but now officially in a part of Aberkenfig, West Street Hall, Bridgend Road. It was renamed therefore as the Church of God, Aberkenfig and there were, during that year, 17 individuals listed in the register with George Prasher now having been recognised as an overseer. The “Prashers” relocated to Matlock during the year. Mr Davies was recognised as an overseer in 1920 and by 1922 there were 22 names of people on the roll.

After 8 years at West Street Hall, in 1925 the church moved again, across Bridgend Road, to East Street Hall, probably on the corner with Bridgend Road and in 1929 a piece of land, one street further north in New Street became available to lease  from Mr Harry Thomas, who lived at 52 St Brides Rd, Aberkenfig.  A fifteen year lease was signed on 26th August for the princely amount of £1 pa, with options to extend the term. Loans were offered by various individuals both part of the assembly and from other churches of God and £140 was raised which allowed the construction of a corrugated iron building, known as New Street Gospel Hall.

Shortly after the establishment of the church a football team was set up, consisting of young men from the area. They played on a field close to the meeting room, recorded as having an awkwardly placed tree. One day, on arriving to play, the members of the team noticed that the tree had disappeared, being removed evidently by a small explosion of excess dynamite from a local mine. Of course, no one from the team admitted to knowing anything about this. Regular Sunday school outings also took place by bus to Ogmore, or by train to Porthcawl. World War 1 saw frequent visits from soldiers, who were stationed near by – perhaps drawn by the numbers of young ladies in the church!

The number of members didn’t reach the dizzy heights seen in the 20’s through the succeeding years and by 1955 had reduced to just five. David Davies and his wife by then had passed away, but Jesse Doel and his wife Alice, and their daughter Alice were still devoted in their attendance. In 1955 Reg Jones and wife Marion moved to Bridgend and joined the assembly and Bernard French and wife Eunice came in 1961 to further swell numbers. Reg passed away in 1998 but the church still benefits from the remaining three’s involvement.

In the 1960’s the opportunity arose to purchase the leasehold of the land, which was readily undertaken at a cost of less than £100. This turned out to be a very strategic purchase, led by the Spirit of God, as with that piece of land being owned by the church it made development of the adjoining land in the 1980’s an unattractive proposition for the land owner when he desired to do so. In God’s perfect timing by this time the “tin shack” had come to the end of its useful life. The overseers of the assembly scoured the Aberkenfig environs for an alternate location for the church without success. The land owner of the adjacent plot to the tin shack, (which had been a funeral directors in the ’60’s but lapsed into a junk yard over time) offered several totally unsuitable plots that he owned elsewhere, but after plenty of prayer on the matter by the church members, he graciously agreed to sell all the adjacent land he owned in New Street, through to East Street for £10,000. The assembly had recently seen numbers being inflated with the relocation of people from North Wales and London, so the motivation to purchase the land, clear it, knock down the shack and design a brand new meeting place was high. 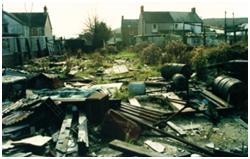 The current red brick church was built in 1988 for under £100,000 which sum was raised by church members and by appeals made to sister churches of God throughout the world. The impetus generated by God’s goodness brought many visitors to the quality building which was in such stark contrast to both the old hut and the junk yard and the number of church members continued to grow. Mike and Liz Clarke who lived in East Street in a house next to the church’s plot were among those who were baptised and when the new building was bulging with so many attendees, they legally assigned a portion of their garden to the assembly, free of charge, and an extension was built onto the 1988 base building. The kitchen built in 1988 was extended and several other facilities added, giving the space and layout we use today in God’s work and service of the local community.

On 10th March 2012 we celebrated our centenary, exactly 100 years to the day since the church first opened. 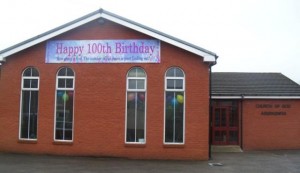