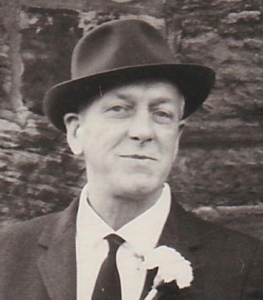 As I write, in a short space of time it will be Fathers’ Day, a time when we show appreciation to our fathers. It’s an event that can be traced back to the Middle Ages, but in the UK it only became popular after the second World War. It will be a strange one this year for some of us. Due to lockdown, sons and daughters won’t be visiting their dads to spend time with them. There’ll be no cards or gifts, no family meal together, just another day.

My dad was born in 1918, a year after Vera Lynn, but whereas she lived to be 103 he passed away at the age of 64, a victim of lung cancer. His ten Woodbine a day had caused his lungs to collapse twice, and they finally got the better of him in 1983.

He was a quiet man who’d had a difficult life. His mum had passed away when he was young, money was scarce, he had to go to war, and ended up in a prisoner-of-war camp, Stalag VIIA. Poverty and war interfered with his education, and he never learned a trade. He drove lorries, buses, and ended up as a steelworker until he was made redundant when the steelworks closed, a few years before his death. There you have it, a potted history of my father.

Jesus, of course, also had a father, but not the man to whom his mother was married. She was pregnant by someone else. What a scandal! Ready made for the soaps, except they’d say the story was too far fetched. Mary, the mother of Jesus, was married to Joseph, and together they had a few children, boys and girls, but Jesus wasn’t one of them.

The real father of Jesus is God, who through the activity of the Holy Spirit and Mary’s willing submission, ensured that his son was born on earth. Jesus was God’s son before he ever came to earth, but he wasn’t known by that name in heaven. Jesus is the earthly name given to him and which he now has forever. Jesus means “he will save his people from their sins”(1), which is what he did when he was crucified. He gave the opportunity of eternal life to all who believed in him.

It’s an amazing truth that God allowed his son to enter into time and space and be born a baby. He watched him grow into manhood, and witnessed all those horrific events surrounding his death. You might think that Jesus wouldn’t be too impressed with his father, who watched and apparently did nothing, but that’s not the case. Jesus knew that his father had allowed his death to happen so that we could be saved, and his love for his father never altered. He once said, “… so that the world may learn that I love the Father and do exactly what my Father has commanded me.”(2) Here was a son who truly loved his father, and obeyed him. Whatever his father asked him to do, that’s what he did, and always did the very best that he could, even when it came to dying on a cross.